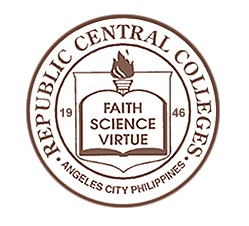 Republic Academy was founded by the Hon. Rafael L. Lazatin with the support of his spouse, Loreto Paras Feliciano.    Hon.  Rafael  L.  Lazatin,   a    prominent  agriculturist  and  industrialist, was a two-term mayor of Angeles City, and provincial board member, two-term governor, and Batasang Pambansa Assemblyman representing the Province of Pampanga. The Founder was aptly guided by his great faith in the Lord and inspired by his unquenchable desire to serve the public. He was also driven by the public clamor for quality education in answer to the pressing need at the time – a school servicing many adolescents who could not be accommodated at the Pampanga High School, then the only public high school in the province. A year after the opening of the high school department, in 1947, the elementary department was also opened. In the same year, upon the request of parents and students, college courses were also offered so that high school graduates may continue their education without having to go to Manila. Thus was born the “Republic Junior College”. Normal and Education courses were also offered. In 1949, the education-conscious masses and the many employees in nearby Clark Air Base requested the opening of other courses; thus, the College of Commerce and Liberal Arts were opened. The “Republic Junior College” was given the name “Republic Central Colleges” with government recognition granted to all of its courses. Heeding the country’s need for Citizen Army Training, the Reserve Officers Training Corps (ROTC) was permitted to be organized and function by the Armed Forces of the Philippines on June 8, 1957. This was the first ROTC unit organized in Pampanga.

The academic year 1963-1964 saw the opening of additional departments, the Law School and the Graduate School. Bachelor of Science in Civil Engineering was offered in June 1966. Computer Science was added in 1991 and Hotel and Restaurant Management in 1997. In 2004, RCC was granted a permit by the Commission on Higher Education to offer Bachelor of Science in Nursing (B.S.N) while Government Recognition was granted in February 2008. From its humble beginning, RCC has expanded in area with the acquisition of the lots surrounding its campus. In 1969, the eight (8) storey S. Rafael main building was constructed while extensions thereto were built in 1992 and 2000. By far, gymnasium was also built in 1985 while the Multi Purpose-Function Hall was built in 1993. With the demise of the founder in 1993 at the age of 87, Victoria Feliciano Lazatin-Angeles was installed as RCC’s second President and Chairman of the Board of Trustees. She is ably assisted by her only brother, the Hon. Carmelo F. Lazatin, four (4) term congressman of the 1st District of Pampanga and three (3) term mayor of Angeles City as Vice Chairman.

In 1996, a two storey structure was built housing the elementary department. From 2000-2003, RCC saw the construction of three (3) storey buildings five storey buildings, the Our Lady of Loreto, Our Lady of Lourdes and Our Lady of Fatima, in place of the old two (2) storey wooden buildings. Facilities were also modernized to include speech, computer, nursing skills, physics, chemistry and biology laboratories. Plans are presently being drawn for the establishment of the more technologically advanced and expensive RCC Colegio de San Rafael by academic year 2010 at the 10 hectare RCC campus at McArthur Highway, Baliti, City of San Fernando, Pampanga. Today, RCC stands loftily in the heart of Angeles City as the enduring legacy of the founder’s love of his fellowmen who, given the opportunity can rise to great heights of professional and personal achievement.